In my youtube travels. I encountered another weird delicacy that was shown in the Andrew Zimmern show "Bizzare Foods" but this time with a little twist. This creature was accidentally found in the waters of Sultan Kudarat. In the southern Island of the Philippines. This sea creature has many names. Wood worm, ship worm etc... The Giant Tamilok is quite different from the common wood worms found on the rotten mangrove trunks. So far they have been found in the waters of Sultan Kudarat and nowhere else in the country. The locals in the area told us that the Giant Tamiloks started to come out around the time when the local lumber yard closed down and dumped a lot of unused timber in the ocean. The Tamiloks live in the sunken timber. The Tamiloks are Giant tube worms, Riftia pachyptila, are marine invertebrates in the phylum Annelida (formerly grouped in phylum Pogonophora and Vestimentifera) related to tube worms commonly found in the intertidal and pelagic zones. Riftia pachyptila lives over a mile deep and up to several miles deep on the floor of the Pacific Ocean near black smokers and can tolerate extremely high temperatures and sulfur levels.


From the looks of things. Its nasty, gruesome and you will ask yourself a question as to why would people eat this in the first place. I haven't figured out the history as to when people started eating tamilok, the only thing I found is how it is to the palate. Finally I had my chance to personally taste the beast when I went home for vacation. The giant tamilok is more like a tube worm than the wood worm they find in the mangrove forest. Its dark in color and has chisel like teeth. Prepping the worm was more of a science experiment to me than preparing a meal. First impression was scary but towards the end. When I started smelling the familiar smells of garlic and onion. I started to relax. They made a dish called adobo. A popular way of cooking in the Philippines. As the Tamilok was simmering in the dish. It started to smell like a shellfish. 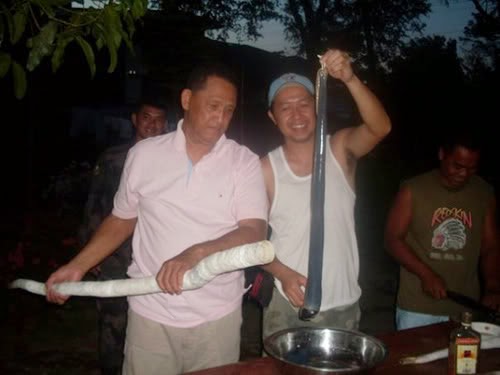 Time for the taste test. The first bite was a little challenging due to the texture of the worm. Its not anything different from a shellfish but since mentally. My thought process was i'm eating a giant sea worm. To my surprise, tamilok tasted just like oysters cooked. The taste broke the ice. I got some more and mixed it with rice. It was actually good eating. I persuaded some of my friends to go ahead and try it. They had the same impression as I did and started to eat like it was another seafood were used to eating. If it won't kill you. Eat it.